Many waterfowl tallied in Jack's Creek and Upper Summerhouse Pond

In recent weeks the waterfowl, wading birds, and shorebirds have been present in good (slightly early?) numbers on Bulls Island, Cape Romain NWR, Charleston Co, SC. Yesterday, Wednesday, on my recurring survey there were so many birds that my survey took much longer to complete because THERE WERE TOO MANY BIRDS TO COUNT! I ended up having to make more rough estimates of numbers, including making several WAGs (wild ass guesses), just so that I could safely boat back to Garris Landing before sunset. The Refuge manager is of the opinion that the waterfowl numbers are the best she's seen in 15 years; without having looked at my data, I may be in full agreement with that assessment.

Most of the waterfowl, as usual, are in Jack's Creek with perhaps half or more being American Coots (conservatively numbering over 2000 yesterday). But the water level in Upper Summerhouse Pond (USP) is down leaving many muddy/sandy shoulders and islands around the Pond that have attracted many ducks, wading birds, and even shorebirds (very uncommonly seen at all in USP because the water is usually higher).

A pair of Bald Eagles has returned and occupied a nest; yesterday one was sitting deep down in the nest strongly suggesting either egg laying or egg incubation. Its mate was perched immediately adjacent to the nest. I take that as a good omen for this pair.

Happy Thanksgiving to all, and good birding!

Overnight survey was a privilege producing a life list species, a trifecta...oh, and shorebirds

Due to scheduling conflicts I wasn’t sure that I’d be able to conduct a waterfowl/shorebird survey on Bulls during the current high tides. Thanks to the suggestion from my wife (thanks Nan!) I requested permission to spend Tuesday night in the Dominick House to be on site for Wednesday’s earlier forecast high tide, i.e., earlier than typical for my ongoing survey efforts. It all worked so well that I’ll be making similar requests for overnights more often.

I didn’t depart from Garris Landing until after 4:00 PM Tuesday after seeing the Coastal Expeditions ferry passengers disembark back at Garris Landing. The only thing hurrying me along for that boat ride out was seeing a heavy cloudburst a few miles south of my location, and I didn’t see that until I was about half-way to Bulls. Once safe and dry on the island I took an evening bird walk around the picnic grounds, out Beach Road and Lighthouse Road then back by Big Pond Road and Sheepshead Ridge Road. Somehow one specific bird high up in a tree caught my eye. I had never seen a Rose-breasted Grosbeak before but knew instantly that that was what I was looking at. Chalk up another life list species for me from Bulls! 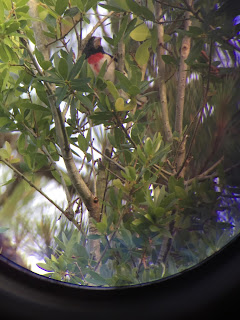 I had planned to walk until dark so that I could listen for Chuck-will’s-widows (CWWIs) at and after sunset. Turned out that I had enough time after my walk to drive up to the main shorebird high tide roost, specifically the oceanfront saltwater marsh at Jack’s Creek, to see what was there. I had a half hour on station as the sun set and as the high tide peaked almost simultaneously. I tallied 17 species there including over 500 Red Knots.

Driving back along Lighthouse Road in the dark I heard my first Chuck. Almost immediately after that the truck headlights picked up an unusual, at least to me, reflection from the roadway ahead, so I stopped. It was so brightly reflective in the dark, and at such a great distance, that I first thought it might be some forgotten artificial reflector as used along roadways to mark ditches and driveways. It had this weird orange to yellow-orange color and was right down on the road. Then it blinked at me, several times. I was able to drive much closer before flushing a Chuck-will’s-widow from the roadway. Then in about another hundred meters I saw another one just like the first. Very cool to see those eye reflections.

But I wasn’t finished with Chuck-will’s-widows. Wednesday morning in bright daylight as I walked off the North Beach I flushed a Chuck-will’s-widow from the roadway. It flew a very short distance, landed on the ground again, and started doing a little hooded wing flutter behavior. I ended up with killer spotting scope views and several digiscope pictures of a Chuck both on the ground and on a tree limb. My best view ever of a CWWI. I’ll call that a trifecta: heard calling (several times), reflective eyes, and posing in full daylight! 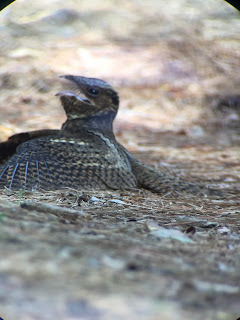 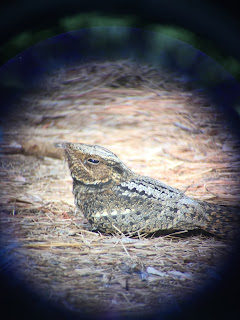 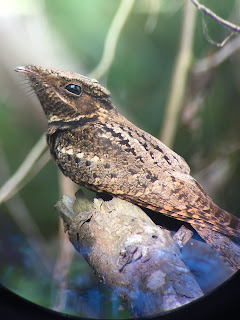 Another of the nightjar species, a male Common Nighthawk, also entertained me with both its peent vocalizations and its wing “booms” made at the bottom of its steep courtship dives. In fact I was beginning to think that this particular bird had taken exception to my presence as it appeared to dive directly above me three or four times in quick succession, “booming” its flight feathers on its wings as if to drive me off. A memorable interaction.

I also studied a pelagic bird at distance over Bulls Bay through my spotting scope. I’ve not yet identified this bird, but it initially reminded me of a Northern Gannet (by approximate size, shape, location, and behavior). It had a big, longish, non-forked tail; long, pointy wings; light ventral plumage; and dark dorsal plumage. It appeared to hold its head well out in front (straight out), slightly down (loon-like), and with a fairly pointy bill shape. It was larger and leaner than a gull. If anyone has a suggestion on a possible ID I’d appreciate hearing your thoughts.

Not to be outdone by these great birds, the shorebirds were resting in good number at the oceanfront saltwater marsh at Jack’s at both Tuesday evening’s high tide, as related above, and again during Wednesday morning’s high tide. Red Knots, Dunlin, Semipalmated Plovers, Black-bellied Plovers, Semipalmated Sandpipers, and Short-billed Dowitchers were present in high numbers, almost all showing full alternate (breeding) plumage.

Other observations from this great overnight birding outing included the obvious absence of horseshoe crabs (at least on the North Beach where I’ve seen many in prior Mays). I saw two black racers (snakes), raccoons, two deer, several fox squirrels, Atlantic bottlenose dolphin, butterflies, deer flies, dragonflies, and American alligators (all but one staying in the water; the one out sunning was actually gaping its mouth perhaps attempting to keep cool). 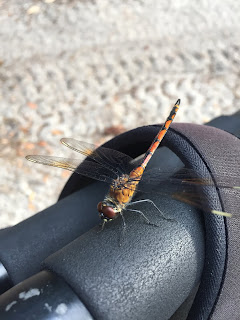 A dragonfly, perhaps a female Four-spotted Pennant, on my tripod

Unfortunately Upper Summerhouse Pond is heavily stressed showing an off color, many jumping fish, and a big fish kill; I don’t know the source of this stress (the pond is really shallow and should easily turn over in the winds thus keeping the aeration sufficient), but something has hurt it, badly.

Even though there were distant cloud banks at Tuesday’s sunset, I was able to see both Jupiter rising in the eastern sky and Venus setting just behind the sun in the west. Jupiter was so bright that I first mistook it for Venus. It occurred to me Tuesday night that I was very likely the most geographically isolated person in Charleston County, likely further afield. The solitude and rest was the opposite of isolation, rather I felt relaxed, comfortable, and immensely fortunate to be able to have the island, and likely the entire Cape Romain National Wildlife Refuge, to myself.

My daughter, Ann, and I recently helped Mary Catherine Martin (SCDNR) in posting beach closings on the southern end of Lighthouse Island in the northern reaches of the Cape Romain NWR. It is a disappointing reality that any areas within a National Wildlife Refuge need to be closed to protect the wildlife, but this is the reality. Similar closings have been made on many other coastal beaches, banks, and sand bars both developed and undeveloped, along S.C.’s coast. Audubon S.C. continues its shorebird stewardship program to educate people on avian conservation efforts. The simple message is for people to share the beaches with the shorebirds. It’s shorebird nesting time, and the shorebirds need simply to be left alone. Do go out to see the shorebirds, study and observe them from a distance, but keep both people and dogs away from posted closings. It’s the shorebirds’ home, and it’s likely a life-or-death interaction for the specific birds nesting right there on the sand. Give the birds this simple respect of leaving them alone and, thus, give them their best change of living and reproducing. Then there will be more birds to see and enjoy!

David C. McLean, Jr.
Charleston, South Carolina, United States
A lifelong birder, I've birded Bulls Island since the 1970s, primarily for the Charleston Christmas Bird Counts and Charleston Spring Bird Counts. I began volunteering for the Bulls Island waterfowl/shorebird survey in January 2012 and have since become the primary survey volunteer. This is an ongoing survey for the US Fish & Wildlife Service and the Cape Romain National Wildlife Refuge. Survey results from April 2001 through June 2004 were published in The Chat: Cubie, D., P. Nugent, and J. Cubie. 2012. A three-year shorebird survey of the impoundments and beaches on Bulls Island, South Carolina. The Chat 76(2): 41-48. (A pdf copy is available at: http://www.carolinabirdclub.org/chat/issues/2012/v76n2shorebirds.pdf#page=1)